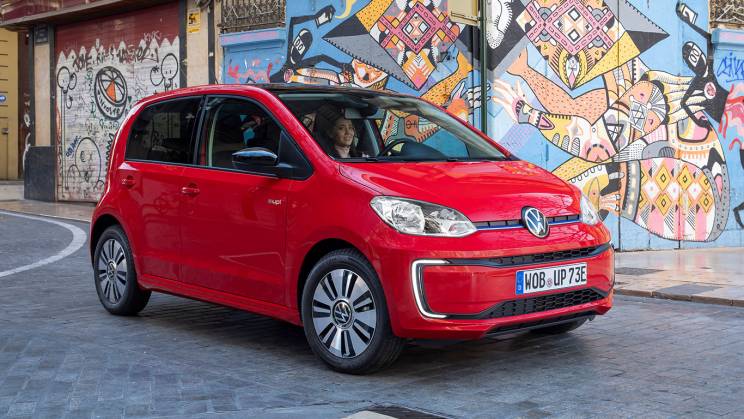 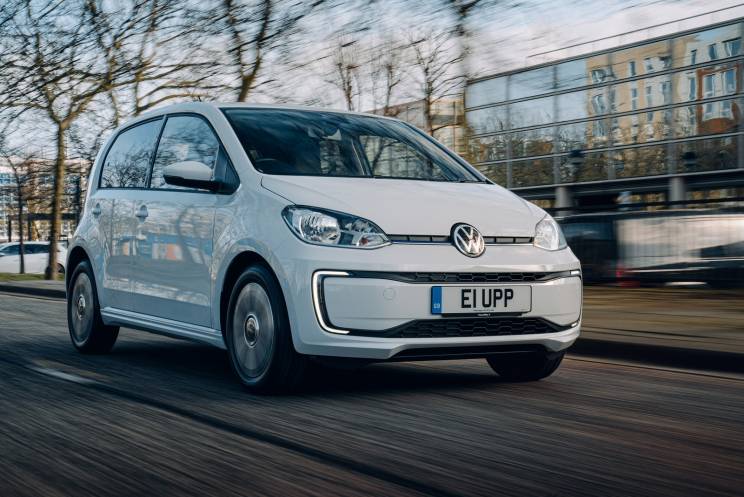 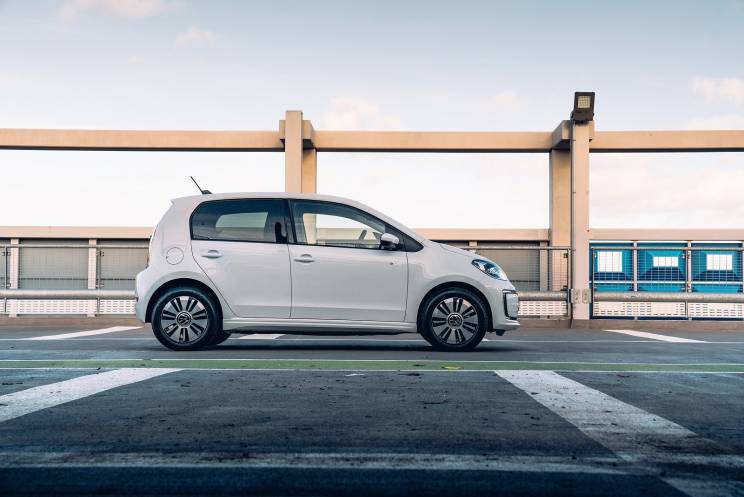 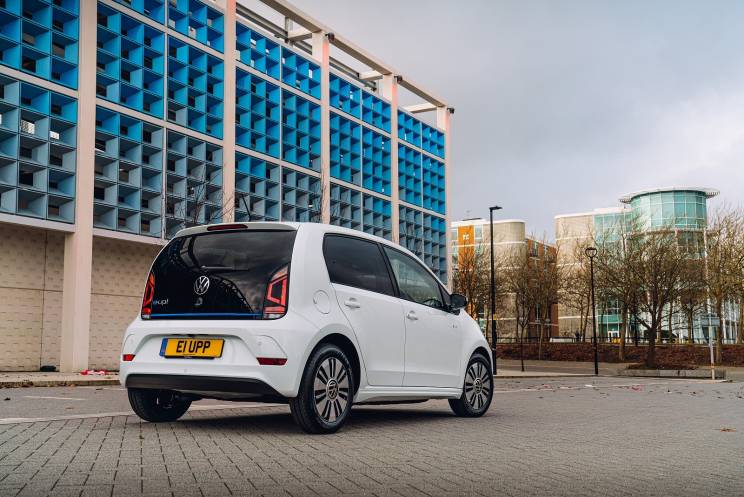 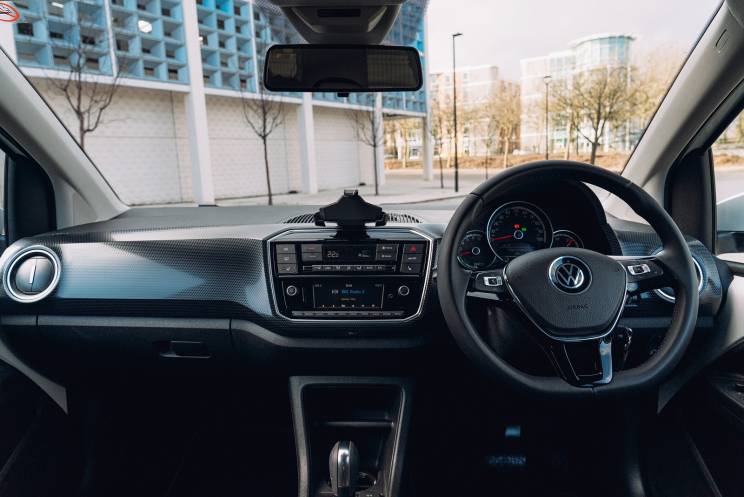 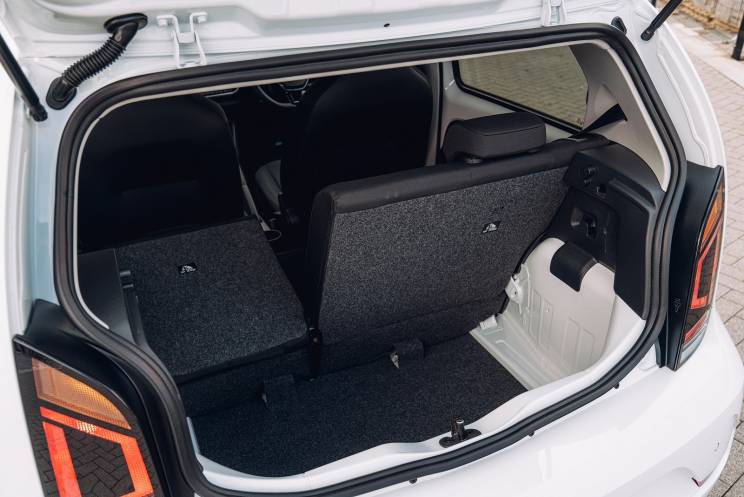 The Volkswagen e-up! is an electric version of the up city car. Jonathan Crouch takes a look at the Wolfsburg brand's now-improved representative in this rapidly burgeoning sector.

Ten Second Review
The Volkswagen e-up! is an electric version of the popular up! city car with a now-longer range of around 159 miles. It remains a strong package, but there are still nagging doubts as to how it can justify itself on the balance sheet against a more prosaic petrol-powered up!

Background
Shall we get the jokes about it being trialled first in Yorkshire out of the way good and early? Let's get to the facts here. Back in 2014, the e-up! was Volkswagen's first tow in the water when it came to electric cars. Back then, the battery range was rated at just 83 miles - and that was on the old, rather unrealistic NEDC cycle. Today's e-up! Can, in real terms, go almost twice as far, thanks to a larger lithium-ion battery pack and it's been much improved in terms of comfort and safety. As it needed to be to combat the new wave of small battery-powered models now hitting the market. Should this one be on your shopping list? Let's find out.

Driving Experience
The Volkswagen up! actually makes a great basis for an electric vehicle. The powerplant sits low in the engine, a lithium ion battery pack now almost doubled in capacity, up from 18.7kWh to 32.3kWh. The fact that this battery weighs 230kg and is sited under the floor area has benefits and drawbacks. The plus side is that the centre of gravity is good and low, something you'll feel when tipping the up! into a corner. The downside is that whereas an entry-level petrol-powered up! weighs around 929kg, this electrically-powered version tips the scales at nearly 200kgs more. The sheer amount of torque available masks this fact quite well though, and the car steps off the line briskly, making 37mph from rest in around 5 seconds. Acceleration does tail off markedly above 45mph or so though, but given that this car's going to spend most of its time in urban areas, that's not really a pressing concern. As well as a standard driving mode, the e-up! has two economy profiles as standard: 'Eco' and 'Eco+'. 'Eco' cuts the vehicle's peak power to 50 kW, reduces the output of the air conditioning system and modifies the throttle response. 'Eco+' limits maximum power to 40 kW, further modifies the throttle response and disables the air conditioning. On top of these different operating modes, the range of the e-up! can be greatly influenced by regenerative braking. There are five modes available: D, D1, D2, D3 and B. In D, the vehicle coasts when the accelerator is lifted. In each of the next levels, lifting off the throttle pedal provides an increased level of regenerative braking. In D2, D3 and B, the brake lights are automatically activated when the driver's foot is lifted from the throttle pedal. If anything, the extra weight means that the e-up! rides better over typical city streets than its petrol counterpart. Refinement is very good, as you'd expect from a car with no internal combustion engine. There's just a background whine from the electric motor and some bump and thump from the suspension but otherwise it's extremely serene and takes the stress out of nose-to-tail queuing.

Design and Build
Externally, the e-up! can be identified by badges on the front wings and bootlid, as well as by distinctive C-shaped LED daytime running lights, and 15-inch 'Tezzle' alloy wheels. But these are details. Essentially, aside from the lack of tail pipes, the five-door e-Up is hard to identify without looking for the badging. At just 3.54 metres in length, 1.64 metres in width and 1.48 metres in height, the Up is one of the smallest four-seater city cars, measuring a full 11cm shorter than a rival Fiat Panda. Clever packaging means that interior space is maximised. The wheelbase of 2.42m is one of the biggest in class, which combines with that compact engine and lateral radiator to allow the front bulkhead and crash structures to shift forward too. There's also decent room at the back, with a 251-litre boot being a tad bigger than is typical in this class, the e-Up sharing this capacity with the petrol cars. The 923-litre capacity with the seats folded is marginally down due in part to the higher floor height. The port for charging the battery in the e-Up is hidden behind the fuel filling flap. The interior is colourful, with bespoke upholstery edged in blue, while the leather-covered steering wheel, gearlever and handbrake all have blue stitching. There's also the option of painted body-coloured panels. You need to look fairly hard for the e-Up specific switchgear, but that means the cabin design is clean and easy to get to grips with, featuring a compact centre pod for many of the minor controls. There's loads of storage and the cool dished three-spoke steering wheel frames an instrument cluster of impressive functionality.

Market and Model
You'll pay just under £20,000 for this car after subtraction of the generous £3,500 government grant for plug-in cars. As you'd expect given that this is a citycar-sized model, that's quite a lot less than you'd pay for an example of Renault's slightly larger ZOE pure electric car with 3 years worth of battery lease included - and it's significantly less than other supermini-sized EV models like the Peugeot e208 and the Vauxhall Corsa-e. You'll want to allow a little extra for the optional wall box for home garage use. This provides a 3.6kW supply and can recharge a completely flat battery in six hours. The standard e-up! Specification is roughly equivalent to that of a range-topping petrol-powered up! Model and includes luxuries such as heated front seats, cruise control and the Maps and More navigation system. Plus the e-up! adds a heated windscreen, DAB digital radio with six-speaker Sound Pack, the City Emergency Braking system, all-round parking sensors and an electronic climate control system. As well as the standard Bluetooth connectivity and navigation functions of the petrol-powered up!'s Maps and More device, the e-up!'s unit includes charging point location details, range mapping (both one-way and round-trip) and vehicle charging management functions, including the ability to pre-set the vehicle's interior heating or cooling for certain times. Certain vehicle functions can also be operated remotely using Volkswagen's Car Net services on an Apple iPhone or Android mobile device. The e-up! comes with a three-year Car Net subscription that allows users to control or get information on charging status, battery management, doors and lighting, driving data, climate control and the location of the vehicle.

Cost of Ownership
The problem the e-up! faces that cars like the Renault ZOE don't is that it has a conventional petrol-engined sibling that throws costs into sharp relief. True, you'll pay very little to 'fuel' the e-up!; around £1 per charge on a typical UK electricity tariff based on about 30 miles per working day, which would total up to about £23 per month. In contrast, your monthly fuel bill in a petrol car based on that sort of mileage would be around £70 per month. So is saving £47 per month worth the inconvenience of owning a car that would take some planning to undertake a longer run at the weekend? Then there's the fact that a £47 fuel saving a month over three years comes to a mere £1,692, which, given that the e-up! is over £5,500 more expensive than the plushest five-door petrol-engined up!, rather casts a shadow on its value proposition. In order to justify this expense, you'd have to cover a lot more miles. Either you won't want to or the e-up! won't be able to. Free congestion charge entry is one recompense though. Your WLTP-rated driving range in this model is now around 159 miles if you drive it reasonably gently, but that'll drop to well under 100 miles if you pedal it hard and run it with everything switched on, using the 12v socket to boil a kettle. A standard full charge takes less than nine hours from a standard 230-Volt, 2.3 kW household socket. On top of this, all e-up!s have a DC fast-charging circuit as standard. Using the Combined Charging System (CCS), this enables a flat battery to be charged to 80 per cent in 30 minutes, at levels of up to 40 kW using a DC supply. Cables are provided to connect to both a standard UK three-pin socket and a CCS socket.

Summary
Viewed as an EV entity, the e-up! Works well. It'll cost you a lot less than many other small electric vehicles, though you'll have to accept that it's slightly smaller and won't go as far as such rivals on each battery charge. It'll go a lot further than before in this improved form; that range increase has put this contender back in the game. Only if you start to consider it against a petrol-engined up! does the value proposition start to falter. Could you really justify the substantial premium necessary to own this Zero Emissions variant? If you can, then this VW might prove to be a great urban buyer's choice. One thing's for sure: it won't be long before buying a small VW with an internal combustion engine will seem like a very odd thing to do.